Empty Streets: A short film telling the story of a soldier's return from war "Empty Streets" is a film about a soldier who returns from war and loses himself more and more each night that passes.

Johnny, consumed by drugs and alcohol, insomnia, nightmares, and homelessness, wanders the streets at night. He is out at night because that's when he's safe.

The film is based on events in the life of a Marine veteran who served in six years in the military. When he returned home, he had to come to terms with the transition back into society after war.

-We have been checked out of Sacramento Libraries for over 34 of the first 36 months. The film traveled through 12 branches. NO PROMOTIONS (except the first two weeks and a few times on FB.

-With that we say thank you for seven years of support. Our thanks to ALL VETERAN'S OF WAR.
Posted by Empty Streets at 1:00 PM 2 comments:

The Soundtrack of Empty Streets 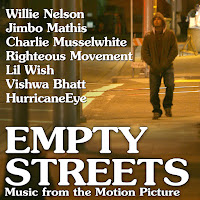 THE MUSIC OF EMPTY STREETS is now available to purchase from these online retailers:

55% of all sales goes to The Veterans Resource Center at Golden West College, with another portion going to the Southern Poverty Law Center.

As the main characters (in the film) Johnny and Carol travel through the lonely night, their journey is followed by a selection of music as wide ranging as the emotions they feel — haunting blues melodies, screaming electric guitar, jazz-influenced hip-hop, gritty rap and metal.

Jimbo Mathus
www.jimbomathus.net
Jimbo Mathus composed a new version of the Marine Hymn for the opening shots of Empty Streets, and recorded the tune at his studio, Delta Recording Service, in Como, Mississippi. He founded the “hyper ragtime” band, the Squirrel Nut Zippers. In August 2007, Paul and Ely drove from St. Louis, Missouri to Como, Mississippi (during the Veterans for Peace national convention) to be part of the session at Mathus’ studio, Delta Recording Service. Ely is playing backup cymbals and tambourine on this track. Mathus played a key role in Buddy Guy’s “Sweet Tea” (2001) and Grammy winning “Blues Singer” (2004) as guitarist and arranger.

Charlie Musselwhite
www.charliemusselwhite.com
Charlie Musselwhite is a 12-time Grammy Nominee and 1-time winner who has played in clubs with Muddy Waters, Little Walter, Paul Butterfield, Michael Bloomfield and has shared the stage with Etta James, BB King, James Cotton and Elvin Bishop. He’s a kind, gentle soul that flat-out wails on the harp. Mr. Musselwhite kindly gave us use of a song titled “Blues for John Lee.” On this track he plays acoustic guitar and it was a song he composed for his late friend John Lee Hooker.

Righteous Movement
www.therighteousmovement.com
It was June 2007 and Paul and Kendyce attended a Righteous Movement show at Old Ironsides. Midway through the set it was clear: Righteous Movement’s musical and lyrical style just had to be part of the film. We used their song, “What’s A Man.” In addition to continuing shows in Sacramento and northern California, the Righteous Movement was on stage at the 2007 Vans Warped Tour.

Lil Wish
“Give Em Whatchu Want” is typical of Wish’s style — a mix of juke, rock and hip-hop. From the West side of Chicago, Wish has toured around Chicago and throughout the Midwest. Lil Wish started winning local talent shows at a young age. We were given his track by our friend Kevin whom Paul and Kendyce met in the "Historic" Chess Records building. Kevin was manager at the Willie Dixon Blues Foundation. The building was responsible for recordings by Chuck Berry, Muddy Waters and the first American recording of The Rolling Stones.

Vishwa Mohan Bhatt
www.vishwamohanbhatt.com
Vishwa Mohann Bhatt is a north Indian classical artist whose style is Hindustani and American blues. He created an instrument called the MohanVeena – a 19-string, modified archtop guitar, which he plays lap-style. Bhatt won a Grammy Award in 1994 for his recording with Ry Cooder, “A Meeting by the River.” Bhatt, from his home in Jaipur, India, wrote and recorded his song “The Author” for this film.


HurricaneEye
HurricaneEye formed in 1992 in Beverly, Massachusetts. Hurricane Eye composed the anthem to the sport of kickboxing, titled “Rage Zone.” During the early 1990s, the group performed at shows throughout Canada and disbanded in 1996. Tim Long, the founder of Hurricane Eye, composed electronic music for MTV’s “Making The Video,” and produced music for MTV, Comcast and Spike.

All songs written and composed by the artist listed with their track.


Posted by Empty Streets at 3:00 PM No comments:

EMPTY STREETS available in SACRAMENTO PUBLIC LIBRARY was released in March 2012. The DVD has has been on shelf five times (for a total of 2 months) in 31 months (and circulated through 10 branches). Place your hold through the Library's online catalogue or at any Sacramento Public Library Branch. That means 29 of 31 months it is constantly checked out. We only did promotion for 2 weeks 31 months ago.
http://find.saclibrarycatalog.org/iii/encore/record/C__Rb2099580__SEmpty+Streets__Orightresult__X5?lang=eng&suite=cobalt

EMPTY STREETS is available in the ORANGE COUNTY PUBLIC LIBRARIES. The film was checked out consecutively for 4 months, shipped to another library and went through multiple holds. Put your hold on it at any Orange County Library or online. It was on shelf on twice in its first 6 months. Still doing well. I see it checked out once a month for 2 years now.
Posted by Empty Streets at 11:00 PM No comments:

Empty Streets is raw and as a combat Veteran I felt its intensity because the story pounces directly from one rough subject to the next, this film is genuine. Cool camera tricks like looking through the drunk eyes of the main character Johnny and intelligent cutting help enhance an uncomfortable feeling that should linger with the viewer. This film reminds me of my last year in the Marine Corps, drunk and in the streets of Waikiki, young and combat blooded. The next few years would be as rough as combat on me but there is something to be said for reviewing that point in life so that others might learn. This film is dark and intelligent; Empty Streets succeeds as far as I am concerned, good job!

Garrett is currently on the road making his film "And then they came home". Check out his blog. The link is on the right side of this homepage.

Garrett has since finished his film, now titled THE NOVEMBER WAR. Check out their website.
http://www.thenovemberwar.com
Posted by Empty Streets at 11:00 PM 1 comment:

-We donated two copies of EMPTY STREETS to the Veterans Resource Center at Golden West College. (On August 30th).

-Honolulu, one of our supporters took jackets to a group of Homeless people.

Posted by Empty Streets at 2:29 AM No comments:

The multi-award winning short film Empty Streets, shot in Lodi, Modesto and Sacramento, Calif., tells the story of “Johnny” and his troubles in society due to being a homeless Veteran that did not receive his government benefits. Empty Streets takes place over the course of one night, but is based on real events in the life of a Marine veteran who returned home with Post Traumatic Stress Disorder (PTSD).